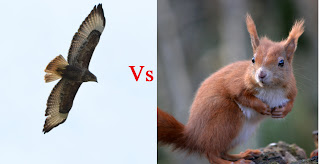 Ive just received an e-mail from BBC South, who are following up reports of buzzard attacks on red squirrels, here on the island. They are doing some research on this subject, with a view to a possible programme on this issue.

I myself have not heard of any attacks, nor seen any, but I guess that the way to investigate would be to inspect the nests of the buzzards to look for bones, fur, or remains of squirrels. I would imagine that the droppings/pellets would leave evidence too. I would imagine that only a licensed person would be able to do this, so a proper study seems to be the way forward.

Maybe more evidence needs to be gathered, a study made on the growing population of buzzards on the island vs the (declining?) numbers of red squirrels, would be a good start.
I for one, was totally against the cull of buzzards earlier this year, as were loads of people who signed my online petition. But the cull I beleive was only started by the hunting brigade who were against the buzzards, because of the losses in certain parts of the country of the young pheasants.
The buzzard is only doing what comes naturally of course.

Which brings us to the point, would it be right to have a partial cull of buzzard eggs to protect the red squirrels, if it was proven that these beautiful birds were seriously affecting the population of reds?
A tricky one!
A cull or partial cull to protect the red squirrels population on the island would be controversial, but I beleive if the issue of buzzards seriously affecting red squirrels, to the extent that they would become endangered then maybe this could be justified.

What does everyone think about this?
Have you seen or heard of any attacks?

Hi,
Im Dave from Sandown on the lovely Isle of Wight.
Welcome to my birding blog.
I love the great outdoors and all forms of nature.
I hope you find this blog interesting, feel free to comment on anything, or e-mail me at: daveiow@hotmail.co.uk
Thanks for looking! 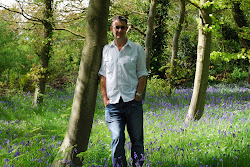